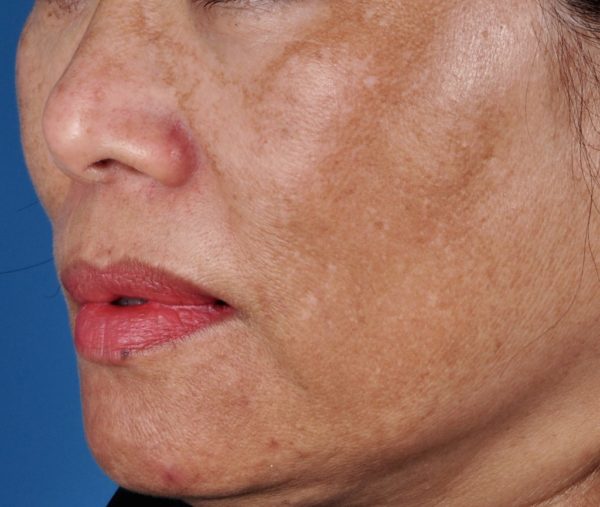 It is not uncommon for pregnant women to develop dark blotchy areas on their faces
and although Melasma, also known as “pregnancy mask” is more likely to occur with women of darker complexions, it can also occur in those with lighter skin.

If melasma or hyper-pigmentation runs in your family, you too are at risk of developing melasma. Additionally, if you have had discolouration with any one pregnancy, you have a greater chance that it will reappear, even more severely, with each pregnancy thereafter.

Typically splotches appear around the upper lip, nose, cheekbones, forehead or jawline and sometimes, in the shape of a mask. For some women, the patches appear on forearms or other body parts that are exposed to the sun. For other women, body parts that were already darker, such as nipples, freckles, scars or skin in the genital area can also darken.

Changes to pigmentation are brought on by hormonal changes which then trigger a temporary increase in your body’s production of melanin. Areas of increased pigmentation usually fade within a few months after giving birth; however, for some women the changes never completely disappear.

During pregnancy it is important to be diligent with use of sunscreen, protective clothing and overall safe sun habits, as prevention is the first line of defense.

For those whose dark patches that did not fade after giving birth, speak to your Doctor or a Medical Aesthetician for safe, non-toxic treatment options that can be used at home, or Laser Treatments by trained experts.